One of our lovely contributors, Kelly DeBie, shared this post. The interesting part about it is that many people assumed she wrote it about a female friend. But it was written about a man. A Father’s grief.

Read on to see what Kelly has to say about this father’s grief and the way he has been responded to. 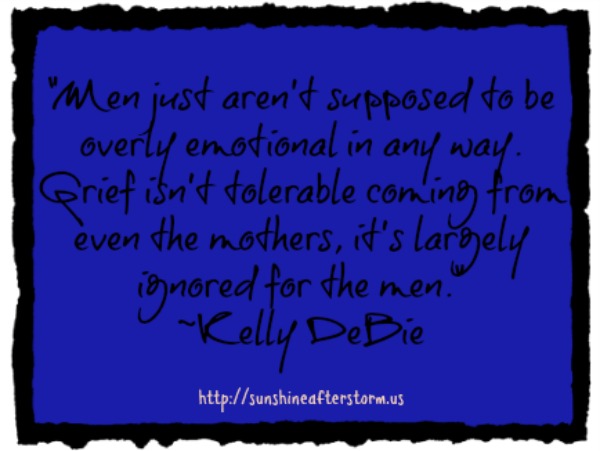 Last week, I wrote a post at the urging of a friend.

This particular friend has endured years of struggling with fertility issues. There have been pregnancies, but those pregnancies haven’t ended the way they should have. They ended after only a few weeks and brought a fresh dose of heartache each time.

This particular friend reached out to me and told me what was going on after they’d asked for consideration from their Facebook friends on the issue. Specifically, they requested that people stop trying to placate them with the idea that they can always adopt if this doesn’t work out.

This particular friend had a particularly bad day after posting that status.

This particular friend reached out to me and asked me to write about it, and I did. If you haven’t read that post, you can find it here. It revolves primarily around the painful truth that far too many of us have lived. The truth is this: the very people who intend to help you with their words are more often rubbing salt in your wounds.

Within an hour of so of posting it and sharing this link with this particular friend, it started to pick up shares. The friend thanked me for saying what they’d tried to find the words for. Those who understood this place all too well related. They shared it. They messaged and commented.

What some of them assumed, though, opened up another can of worms.

Several people assumed that this friend of mine, the one who mourned all these pregnancies, the one who wants nothing more than for people to stop suggesting alternatives that don’t really exist, was a woman.

He saw the comments, the kind words, the notes from readers urging me to send wishes to my friend.

And then he wondered.

Why had so many assumed he was the woman, the mother?

Though I can’t say for certain, I have a hunch. That hunch is rooted in my personal experiences, firmly grounded in the experiences that others have shared with me, still more in the stories of the men who contributed to the book about child loss and infertility that I was a part of creating last year.

That book, Sunshine After The Storm, was one that originated with mothers. The idea of it, something that started deep in the heart and soul of our leader. Over the course of several months, she reached out to some of us and we reached out to more, asking others to share their stories with us. 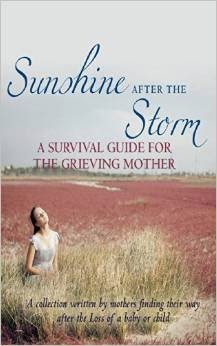 Initially, the project was 100% female written. I’m not even sure how it came up one day, but we realized that there was a huge part of the story missing if we only ever included our perspective, the one belonging to the women. We needed the voices of the men, the fathers of these children.

We were so fortunate that several of them jumped in to the project and provided that voice.

We weren’t the whole story.

Where were the men? Why weren’t they there from the beginning?

Part of that, a big part of it, is likely because our society (and most modern day societies, for that matter) is one that attaches far more emotion to the mother relationship than to the father relationship. Part of that is necessarily connected to the physical aspect. As women, we are the ones who bear the children. Our bodies house them, sometimes our bodies can’t sustain them, sometimes our bodies betray us, sometimes we are just unlucky, sometimes we don’t ever know what happened, but it happened and it happened inside us. Our bodies are the ones poked and prodded and drugged and manipulated.

We are, as women, expected to bond with this baby from the moment we know we are pregnant.

We are, as women, expected to be emotionally connected from that day forward for the rest of our lives.

Except that they did. Perhaps not in the intimate physical way we did, but their loss is there never the less.

Or we are the ones who can’t have children, even if the cause of infertility is never known or male in nature.

While women are expected to bond with the mere idea of a pregnancy instantly, our society doesn’t expect men to make that connection until after birth, maybe even later. Men are expected to be strong, stoic, steady, distant, less connected. Partially this is because of the truth that they aren’t the ones dealing with the physical, but a larger part of it is societal.

Men just aren’t supposed to be overly emotional in any way. Grief isn’t tolerable coming from even the mothers, it’s largely ignored for the men.

Think about it. How many of you out there have lost a child, whether through miscarriage, through stillbirth, through early infant loss, through any other way it happens? How many of you have endured infertility?

How many of you who’ve been in that place ever had friends and family express concern for the man that lost that child? How many have experienced an equal outpouring of support for a man enduring infertility?

If you did at all, was the outpouring of concern disproportionately targeted at the woman?

I’m virtually certain that it was. I know it was for us.

I lost the baby.

People wanted to know how I was.

No one ever asked how he was.

Grief is a difficult enough topic to discuss as it is, the grief of a struggle with infertility, of a lost pregnancy, of a lost child, too much for most people to stomach. They don’t want you to be sad because they can’t deal with it. We are urged to get over it, the mothers of these children, the women who can’t conceive, but at least people assumed that we had something to mourn in the first place.

For the men, for the fathers, there is far too often no acknowledgement of their loss at all.

If they confide in someone about their struggle with infertility, of their lost pregnancies, the conversation inevitably shifts to the women. How is she handling it all? Is she okay?

The man, on the other hand, is assumed to be okay, to be strong, to be sturdy and stable and grounded.

And yet, it happens every single day.

On behalf of my friend and all the fathers out there without the children that should be with them, I ask that we do a better job of remembering their grief too.

It won’t be the same as the grief of a mother. It can’t be. It never would be. The experience of every single person in every single situation is necessarily different, even among mothers who have been through very similar circumstances. That doesn’t mean for one second that the grief of the father is less, that it is more transient, that it is something we can shrug off.

They are hurting too.

They shouldn’t have to do it alone.Help us support Grieving Mothers with our book: